While there are always exceptions, the general rules of color inheritance in miniature bull terriers are as follows:

1) Two white parents will produce an all white litter. Puppies may display small colored patches on the head or ears, but less than 50% of the body will be colored.

2) Two solid parents will produce all solid puppies. The term “solid” refers to a colored coat with minimal white markings. All puppies will be colored on approximately 75% (or more) of the body.

4) One white parent and one solid parent will result in an all colored & white litter. On average, puppies will possess a 50/50 colored and white pattern.

Based on simple Mendelian genetics (dominant vs. recessive genes) it’s possible to predict offspring coloration if the parents’ genotypes are known. Genotype is just a fancy word for what genes a dog carries on its chromosome. This can be determined with a little knowledge of how genetic inheritance works but usually requires an advanced scientific background. In general, the genotype of a dog can be worked out if the colors of the siblings, parents, and grandparents are known.

There are two main types of miniature bull terriers: white and colored. Dogs, in general, have around 14 different genes at various loci (locations on the chromosome) that code for coat color. Only 4 of these genes are believed to be involved in bull terrier coloration. These genes are found at the A-locus, K-locus, E-locus, and S-locus. Multiple alleles (different versions of a gene) are possible at each location, hence the range of colors exhibited by the miniature bull terrier.

A-series locus: Determines the base coat. Depending on the combination of alleles present, the dog will exhibit a fawn coat, a dark red coat, or a black and tan coat. There are various shades of fawn, red, and tan ranging from light to dark. Brindling is determined by another gene and is not a base coat color. There may or may not be white markings; however, white markings are not controlled by the A-series locus. 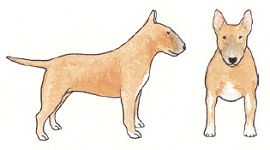 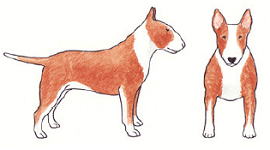 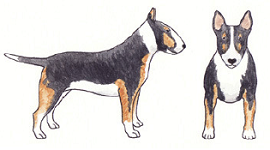 K-series locus: The brindle gene. This determines whether the dog will have a brindled coat pattern. Brown brindle and black brindle are the only two patterns associated with miniature bull terriers. Brown brindles have a uniform pattern across the entire coat, sometimes displaying slighty darker coloration around the face area. Black brindles possess a black coat and usually exhibit brindling on the legs and head area. There may be minimal striping observed on the body. Reverse brindling (tiger striped) is not exhibited in this breed. 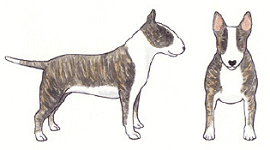 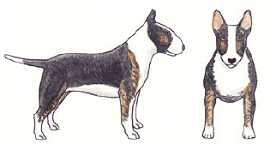 S-series locus: The white gene. This gene determines whether or not a dog has white markings or a solid white coat. Miniature bull terriers are not considered true white dogs. The solid white coloration in the breed is caused by the masking of another gene that actually codes for color. White terriers may have small colored markings on the head area (i.e. a colored ear, or the sought-after “pirate” with an eye spot). 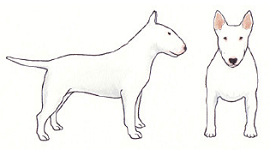 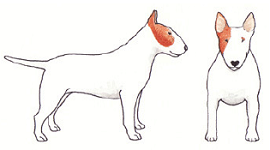 E-series locus: Controls the presence of black masking on the face. Gene manifests as a black mask on the muzzle known as “smut”. This is mostly observed in red or fawn dogs due to the light coat coloration. Brindle dogs sometimes carry and exhibit this gene but it may not be apparent due to the dark brindle coloration of the coat. 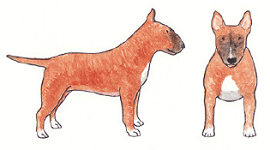 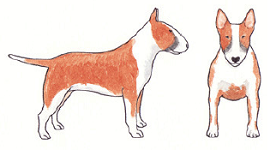